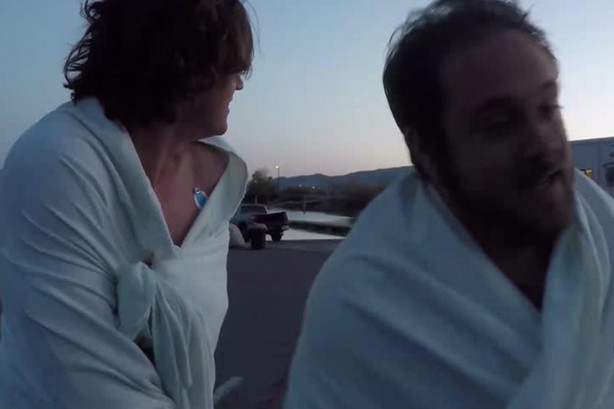 PROVO — A couple of adventure seekers set sail on Utah Lake last weekend but quickly realized they were literally in over their heads when their hand-crafted pirate ship sank.

Adventure enthusiasts Levi Harris and Landon Smith constructed the boat using four inner tubes, one kitchen table, and a hammock for a sail.

“It was homemade, but it worked,” Levi Harris said. “It worked actually pretty well.”

Harris and Smith dressed the part before setting sail, and declared themselves “probably officially the first pirates ever to sail on Utah Lake.”

For the most part it was smooth sailing until Capt. Landon and his first mate went under water.

“It was cold enough that we got mildly hypothermic. But, we made it,” Harris said.

The two were evaluated by emergency personnel and were not seriously injured, but their voyage ended with a cautionary tale.

“It was dangerous, and that’s something that we learned,” Harris added.

They only had one life vest on their pirate ship; although Utah law requires at least one lifejacket for each person on board. Officials let them off with a warning for that.

The adventurers have since considered some changes. “Maybe not with a table, but the hammock thing worked good, so I think we’ll explore that option. (And) definitely taking more than one life jacket,” Smith said.

Officials called the incident a good safety reminder. As the weather warms up, outdoor adventurers should have fun but also be safe, they said.