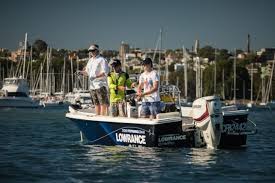 GET more from your SideScan technology with these simple tips from Scott Thomas.

LOWRANCE’S SideScan technology has been around for a few years now and over that time switched on fishos have honed their skills and are now using it to its full potential. See below for our top five tips on making the most from your SideScan technology. We promise once you’ve worked out the fundamentals behind this technology, you’ll never fish without it again.

Firstly, a quick recap will help you understand how this technology works. SideScan is part of Lowrance’s StructureScan technology. It’s a departure from conventional sonar imaging and uses a transducer with a narrow beam and higher frequency. And in the case of SideScan, the transducer shoots out a wide beam and covers each side of the boat. The end result is a much clearer picture and combined with CHIRP sonar, creates incredible definition.

Where to use SideScan?

Some fishos will have a use for SideScan more than others, although you might be surprised just how useful this technology is for all types of fishing. Bream, bass and barra fishos targeting these species in rivers and dams will find it invaluable for locating deep water snags and pin-pointing fish along edges. SideScan can also be used on one side of the boat, which works well when prospecting along a bank. The attached pictures show an old river bed in lake St Clair in the NSW Hunter Valley. This type of information was never so revealing with old technology sonar and really helps fishos locate fish in these impoundments.

Saltwater fishos also find SideScan useful when locating schools of bait and nearby predators. The excellent target separation will reveal exact locations of bait and show you what larger predators are lurking nearby. Again, saltwater anglers fishing structure like FADs or deepwater marker buoys are able to determine the likelihood of bait or fish alongside the structure.

Lowrance offers several screen configuration options or lets you customise your own. I like using a split screen between side scan and conventional sonar. Sometimes I’ll also add the chartplotter screen if that’s needed. Using the split screen gives you quick reference between the fish or baits’ distance from your boat and its depth. Once you locate some fish on the SideScan screen, look for the same object on the sonar. You can also drop a waypoint on the bait or fish for further accuracy. I also find using the split screen is a good way to learn how each field of view operates and makes you better at reading your sounder.

Unlike traditional sonar, which only covers a narrow percentage of the water column, SideScan, as mentioned above, scans out and shows fish in water otherwise out of reach. This is a big plus for shallow water anglers searching for fish.
In deeper water side scan will still reveal a greater area than traditional sonar and proves just as useful.

Since the release of Structure Scan several years ago, Lowrance has recently taken it further with its 3D Structure Scan. As the name suggests, 3D technology gives anglers even more detail and creates an image that’s easy to define. This is good news for people not overly familiar with the technical aspect of this technology. The 3D image is intuitive and really allows you to see under, or beside your boat as it really is.

With this sort of technology expanding at such a rate of knots, who knows what’s next? Despite the technology advancements, the advent of SideScan has, and continues to be a fundamental tool in every serious angler’s arsenal.

Check it out at lowrance.com.au