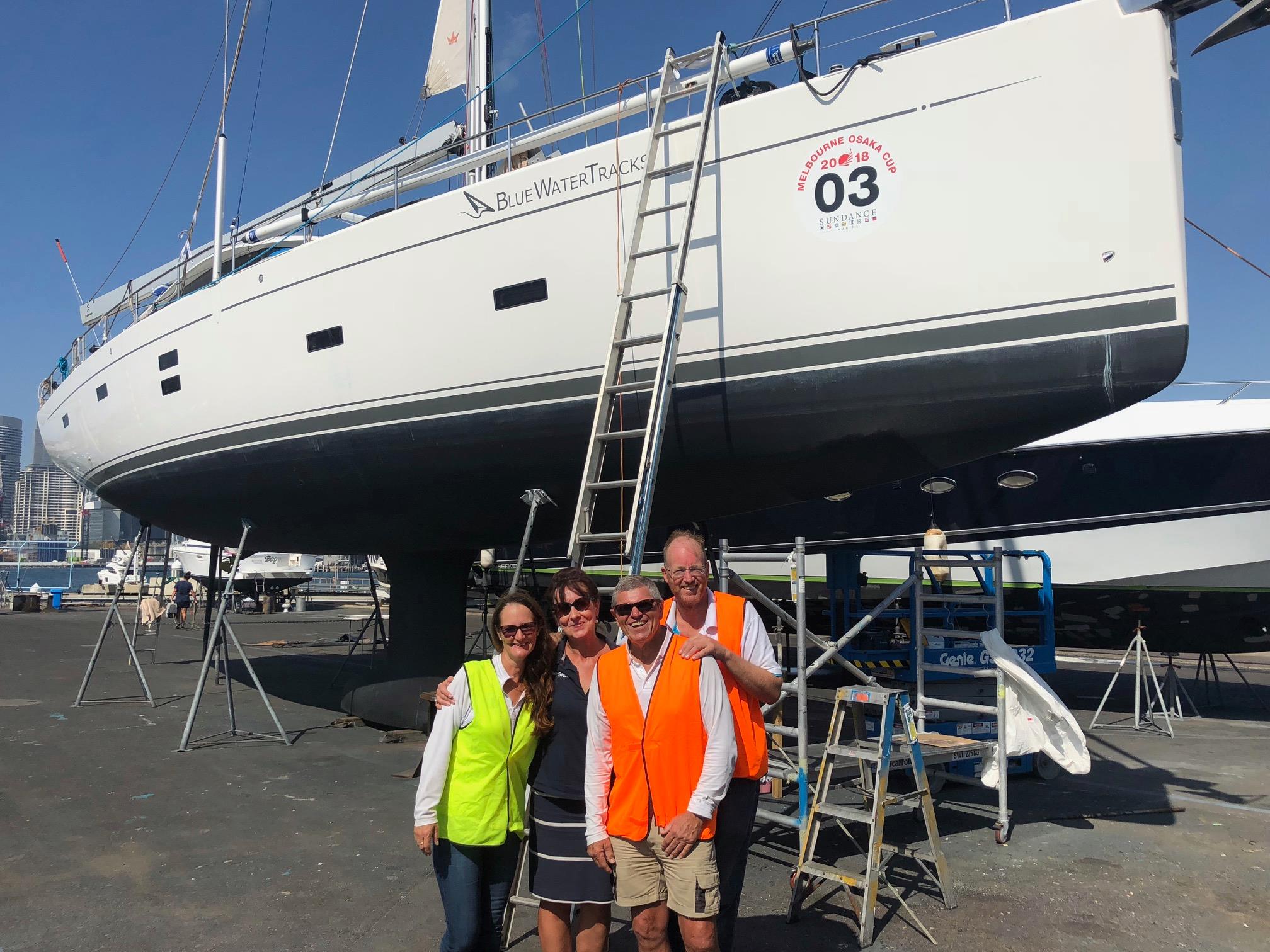 White Bay 6 Marine Park played host to Blue Water Tracks, a Moody 54 Deck Saloon, as she stopped in Sydney for some urgent repairs on the way to Osaka whilst competing in the Melbourne Osaka double handed race. We pulled out all stops to help them out with our tenant, Cosine Shipwrights working around the clock to get them back in the race.

After sitting at anchor for 48 hours the time had finally arrived. At 7 a.m. we picked up anchor and started to motor to White Bay 6 marina, passing underneath the picturesque Sydney Harbour Bridge to where we were going to hauled out.

We arrived at 8:30 to be met by Andrew the marina services manager and where hauled out at 9 am like clockwork.

Lorraine, (White Bay 6’s GM) and Shane dropped by to say hello and to make sure everything was ok even though they weren’t scheduled to back on site until tomorrow.

Allan from Windcraft immediately went into action assisting with stripping the bow section of its batteries before we turned our attention to the underside of the boat.

By 2:30 p.m. and without a break Allan had removed the mangled under section of the bow thruster and it now sits on the tarmac lonely and unloved.

On further inspection we discovered cracks in the watertight bulkhead separating the sail locker from the main cabin.

David and Jill Henry, the parents of Rupert from Chinese Whispers dropped by offering cars and accommodation and to find anything else that we may need.

David and Jill are both sailors and as the conversation turned to Chinese Whispers you could see the smile breakout on Jill’s face. They were both incredibly proud of their son’s achievements. They are both planning to fly to Japan to celebrate his arrive in Osaka. The time we spent with Rupert’s parents was truly a golden moment in our day.

8 pm Allan SMS’ed, he has just been advised there is a shipwrights picnic holiday tomorrow (Tuesday) and it looks like we are now targeting Thursday at best to be back in the water. Grant & Sue”

Yesterday Carl from Cosine Shipwrights arrived and started the process of removing the remaining equipment from the bow thruster and grinding around the outside of the housing in readiness for the new layers of fibreglass.

The bow thruster has given us so much trouble over time that we have made the decision to have it removed and replaced with a new unit on our return.

In order to get back into the race as soon as possible we are now going to glass over the opening leaving the housing in place.

On reflection the cracking in the bow thruster has probably been happening for over a year now. The original stiffener was not able to carry the load and cracked, as a result the skin begin panting, this flexing eventually cracked the base of the bow thruster housing.

At the started of the race as we passed through the heads coming out of Melbourne, it was here that the boat slammed off the back of two waves. It would have been this that was the straw that broke the camel’s back causing the skin fairing to tear away and the internals to come down and drag.

Carl has advised that we should expect to be splashed around lunch time Friday.

In the meantime cyclone Iris is holding most of the fleet at Coolangatta. In normal circumstances we would have now been 7 days behind the fleet, however with cyclone Iris blocking the way we are now find ourselves 3 to 4 days behind.

The Race Director put out a notice to competitors, number 5, which lists two options for avoiding the cyclone, one being the ability for yachts to suspend racing and take shelter.

In a technical move and being just a little cheeky, we notified the Race Director that we had resumed racing, all be it from the hardstand and then one minutes later advised that in accordance with notice number five we are taking shelter and nominated Sydney as our safe harbour.

Without a doubt the international race jury will now have to wrestle with this one, but if it works it may have just bought us 3 days.”