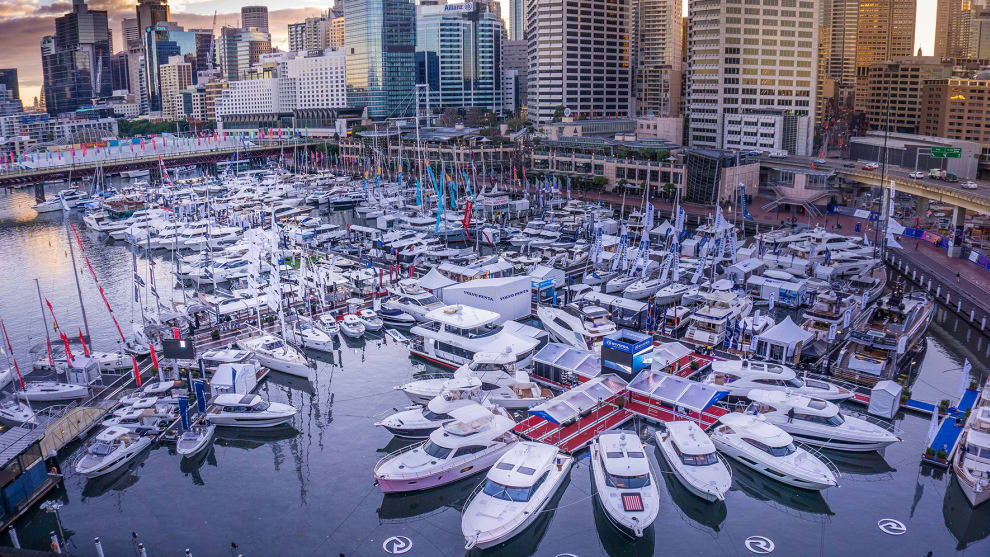 The long-awaited return to the ‘spiritual’ home of the Sydney International Boat Show at Darling Harbour has paid dividends with a significant increase in visitor numbers over the five-day show.

Early figures from the Boating Industry Association (BIA) indicate that over 63,000 visitors attended the show this year, a substantial increase on last year’s figures of less than 50,000 and on a par with those in 2012 before the show left Darling Harbour.

BIA national CEO Howard Glenn said that while the final attendance figures will not be known for a short while, the Association believes the real result will be recognised over the coming days as exhibitors collect their results.

“We had a number of factors in our favour. Our return fully to our spiritual home of Darling Harbour, the recognised 50th anniversary, exceptional weather, exhibitor optimism and very strong indications that consumer sentiment is on the rise,” he said.

“The Association had a clear vision of what the industry wanted and needed, and set its sights on achieving it. This show has been years in the planning, and our attitude was that nothing could be left to chance. Planning and attention to detail was paramount.”

Inside the exhibition halls and on the marina, the feedback from exhibitors was generally positive about the numbers of people coming through as well as the new venue.

“We consider this to be Australia’s tradeshow of the year with such a positive attendance of boatbuilders, dealers, engine manufacturers, retailers and wholesalers all coming together in a beautiful new location attracting a great attendance of guests from all over the country to promote our industry and boating,” said Jason Mitchell at All Marine Spares.

“Highlights of our show were our Volvo Penta show promotion, growth of new customers across Australia and New Zealand interested in our products and brands, and of course the extremely strong reception and orders we have received with the complete line of Sierra Parts now available.

“We will be 100% back next year with more energy than ever. Congratulations to the BIA on hosting a great show.”

“Off the back of our successful BLA Trade Show, coming into one of the largest consumer shows, we can say we are very excited about the current and future opportunities in the industry,” he said.

“BLA had a large footprint again this year, and we were excited to showcase the latest and greatest from our brands including SeaStar Solutions, Humminbird, Minn Kota, Sierra, Mastervolt, BEP, Lewmar and Fischer Panda. We were particularly pleased to launch our newest brands at the show – Clarion, 3M, Hydrotab, AIS Vesper Marine, Aquamarine, Mega Pulse and Tru Design.

“The new venue was great, and we had constant and quality enquiries that will continue to flow through to our dealers, retailers and OEMs.”

The positive sentiments were backed by several wholesalers and retailers at the show. David Allen from Sam Allen Wholesale said the company had “a very good show” with plenty of business being done and good quality customers. Errol Cain from Australian Marine Wholesale launched a number of new products at the show and said it had gone very well with new Fusion products in particular among the highlights.

On the marina, Maritimo CEO Garth Corbitt said the show was one of the strongest ever with buyer interest from all the major Australian States and New Zealand.

“For reasons of commercial in-confidence we do not talk specific numbers but needless to say there was a lot of interest across the range of models we were highlighting in Sydney and the S70 in particular was a show stopper,” he said.

“We have finalised multimillion dollar deals and continue to talk to visitors at our display. I am confident further sales will result. There was buyer interest from Western Australia, South Australia, NSW naturally and also from Queensland.”

The positive feeling was backed by other manufacturers and brokers on the marina who reported confirmed sales at the show and strong interest across the board.

Sam Nicholas from Fleming Yachts who had two boats on display this year said he was delighted with the result and had made a major sale of a Fleming 55.

Phillip Pitt from Pacific Boating in Sydney said the show had delivered a very pleasing result with a noticeable upsurge in inquiries and business.

Catamaran broker, Multihull Solutions, said it achieved record sales at the show, taking orders on nine new power and sail multihulls to the value of $11 million.

Five orders were taken for the Fountaine Pajot Helia 44 Evolution sailing catamaran, with four of the Australian clients choosing to collect their new boats from the shipyard in France in 2019. Each of the buyers purchased the catamaran for private use with plans to embark on world cruising adventures.

Two Lucia 40 sailing catamarans were ordered by New Zealand and Queensland clients with delivery scheduled for 2019 and 2020, while a Victoria 67 sailing catamaran was sold to a family who will receive their new boat in 2019 for a cruising venture around the world. The new MY 44 power cat was launched at the show with an order being placed by a Queensland couple.

“We have never experienced the level of interest that we had at the Sydney show, with our entire team run off their feet to cater for the constant stream of genuine buyers at our stand,” said Mark Elkington, Multihull Solutions managing director.
The best stands on show

The BIA presented its annual awards for the best displays and stands at the show including: