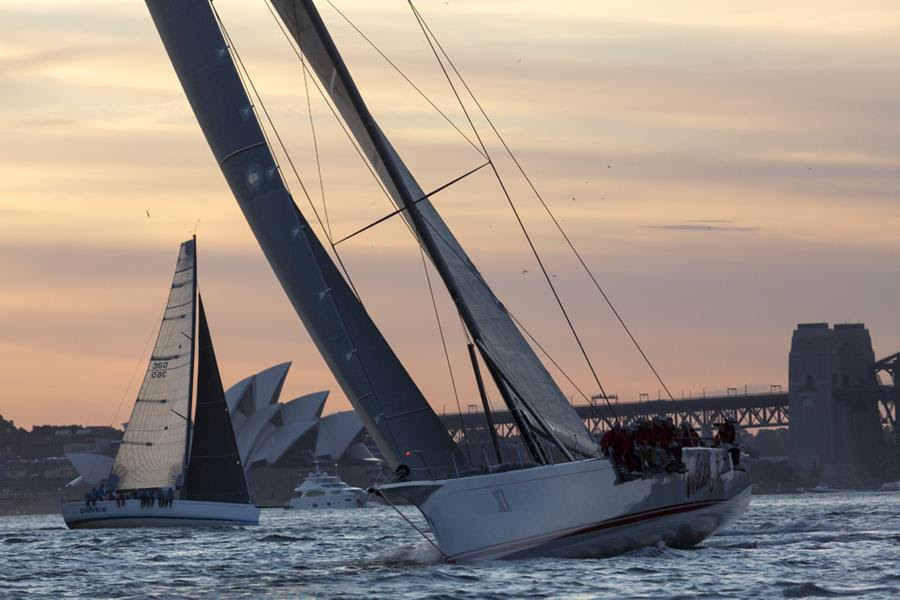 The fourth race of the Audi Centre Sydney Blue Water Pointscore (Audi Centre Sydney BWPS) series is set to be a thriller with 39 extremely competitive entrants taking the line for the 19:00 start this Friday evening in stunning Sydney Harbour.

With three super-maxis competing this year, the most in the Race’s history, this will be more than a qualifying run for the Rolex Sydney Hobart Yacht Race, but a high-powered shoot-out to size each other up for the ‘Everest’ of ocean racing on Boxing Day this year.

“We’re expecting close racing from the super-competitive fleet, and while the initial spectacle will be the shoot-out of the super-maxis, the racing for corrected-time victory is set to be electrifying.

“The race is on for David and Goliath.”

After starting off Point Piper and racing to Sydney Heads the fleet turns north, setting a course for Cabbage Tree Island off Port Stephens, some 90 nautical miles ahead. Rounding the island, the northernmost point of the race, the fleet then sprints for the finish line in Rushcutters Bay, and the opportunity to claim either the coveted Halvorsen Brothers Trophy, EC “Boy” Messenger Memorial Trophy, or Woollahra Cup.

The record number of super-maxis competing this year could be a nod to the bold, victory-fuelled challenge issued by Comanche Boat Captain John Hildebrand after their second record-setting Audi Centre Sydney BWPS race this year – “bring it on!”

The super-maxi shakedown won’t be the only skirmish occurring over the weekend’s racing with the formidable TP52s and similar-sized Reichel Pughs certainly set to sizzle as well. Matt Allen’s red-hot Botin-designed TP52 Ichi Ban, having claimed three from three IRC victories in the Audi Centre Sydney BWPS so far, will be looking to maintain her perfect run.

A smattering of international entries round-out the larger end of town with Li Jian’s Advanced 80 Apsaras from Hong Kong, and Ting Lee’s Jones 70 Noahs II from China. Both yachts will be honing their teams’ skills for their ultimate ocean-racing challenge in the Rolex Sydney Hobart Yacht Race.

On the other end of the scale, this year’s smallest entry, the Sydney 36 Midnight Rambler owned by the Rambler Syndicate, is also taking on the Cabbage Tree Island Race challenge. No strangers to blue water racing, the Rambler Syndicate is made up of ocean-racing legends Ed Psaltis, Michael Bencsik and Bob Thomas, and with 126 Sydney Hobart Races between, expect huge endeavours from the little boat.

Follow the competitors with Yacht Tracker, see the results as they happen, and keep up to date with all the latest news on the new Audi Centre Sydney Blue Water Pointscore series website, launched this year by the Cruising Yacht Club of Australia. Additionally, you can use and follow #AudiCentreSydneyBWPS to stay in touch on social media across the CYCA’s Facebook, Twitter and Instagram  channels.

Don’t forget, Blond @ CYCA will be serving hot food around the clock for the duration of the race, especially for when our hungry competitors return to port. Blond has also extended their hours during daylight saving time to be open 8am – 9pm daily, so there’s plenty of time to grab a bite to eat while watching the race!