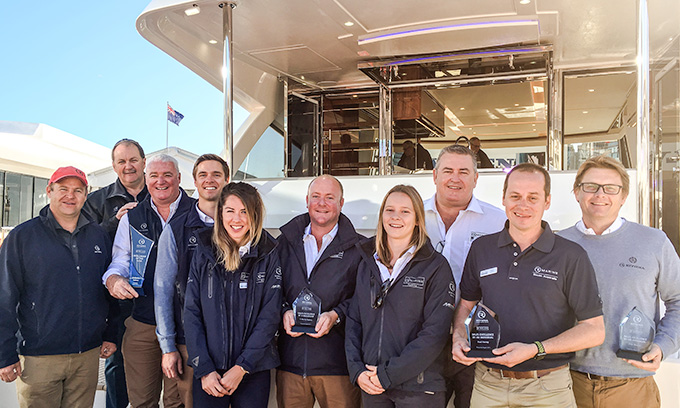 The R Marine Sydney dealership has been named as the best Australian and New Zealand Riviera dealership for 2017.

Announcing the award, Riviera chairman and owner Rodney Longhurst said the judges had a difficult task in selecting one dealership.

“Every one of our R Marine dealerships has performed magnificently over the past year, but in the end there has to be a winner,” he said. “The team at R Marine Sydney has demonstrated excellence in every aspect of their activities, from owner service to support and event management – all revolving around the owner experience.”

R Marine Sydney also took out the award for sales excellence by a dealership.

“We are proud to be a part of the incredible R Marine network and I am personally very proud of the team I lead,” said R Marine Sydney principal, Michael Joyce. “We keep raising the bar in our commitment to our owners and this year opened a new service facility on Sydney Harbour. This will further enhance our support for all Riviera and Belize owners.”

“This award reflects the hard work our large service team has put into expanding their technical knowledge over the past few years,” said Dean Horgan, director. “We have a constant drive to teach and to learn and to improve the skills and dedication of our entire team.”

Rodney Longhurst said the awards are judged over a wide range of criteria and span a full 12-month period.

“The Dealer of the Year award is judged according to the dealership’s relationship with owners, how well they adhere to the Riviera, Belize and R Marine standards, how they conduct experience and educational events for owners and overall sales performance.

“Relationship with owners is vital in our judging. The dealerships and the individuals are judged according to the owner experience and feedback over an extended period.”