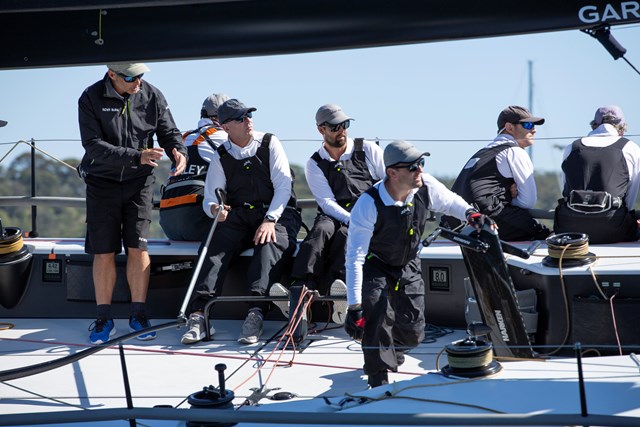 Matt Allen’s TP52 Ichi Ban has claimed IRC and ORCi Division victories in this year’s Flinders Islet Race, the second event in the Audi Centre Sydney Blue Water Pointscore (ACSBWPS) series. This year’s race became a 92-nautical-mile maritime drag race, and with the open race record now pegged over an hour faster than the previous best time, it was the fastest Flinders Islet Race in history.

After a great start, and second only to the race’s 100-foot super-maxi competitor out of Sydney Heads, Allen and crew were able to maintain their positioning for the duration of the race. Taking second place on Line Honours, Allen posted a fast enough time to climb to the top of the IRC and ORCi leaderboards where he remained to the finish. Allen, fresh from his divisional win at Airlie Beach Race Week in August, and very close second at Hamilton Island Race Week, is overjoyed with the result.

“We’re very happy to come away with the win, it was really tight racing the whole way,” says Allen

“It was hard to make gains on the rest of the fleet going towards Flinders Islet, there were a lot of holes in the breeze on the way down and it was incredibly technical sailing. Coming back was a different story though, we had 20-30 knots across the boat and we had a lovely reach into Sydney Harbour and the finish.”

The ACSBWPS, known as the pinnacle of ocean racing in this country, started in July with the Noakes Sydney Gold Coast Yacht Race, and will climax in December with the ‘Everest’ of ocean racing, the Rolex Sydney Hobart Yacht Race, and Allen is no stranger to victory here. The current Rolex Sydney Hobart Tattersall Cup winner, and conventionally-ballasted race record holder, he also holds the same record for the Cabbage Tree Island Race as well as race record for the Newcastle Bass Island Race.

“When we built the boat, that was the brief, and it’s been part of everything we do: to race in, and win the Audi Centre Sydney Blue Water Pointscore series and the Rolex Sydney Hobart Yacht Race. The last time the Hobart race was won twice in a row was around 1965, so it’s been a long time between drinks,” adds Allen.

What has become slated as a ‘battle of the TP52s’ however, soon became a contest of the Kers with Tony Kirby’s Ker 46 Patrice and Mark Griffith’s Ker 40 Showtime placing second and third respectively in IRC and ORCi. With only a little over 15 minutes separating the two, and the lead order changing on an almost hourly basis, it was a spectacle to behold and Griffith is understandably pleased with his result.

“We’re very happy with how we went, the boat was going really well,” says Griffith.

“It was a good, close race with lovely conditions, it was great fun. Certainly downhill we were right up there in the fleet, but when it turned into a two-sail reach we just couldn’t hold onto the longer boats. But we’ve now shown that we’re fast enough to win races, we’ve just got to put it in the right spot and hope the conditions suit us.”

“We’re stoked with the win, we didn’t even realise we were anywhere near that result,” says an overjoyed Bond.

“We were having an absolute ball, there were two other 47.7s out there and we were all playing tag the whole time. It was superb, a real champagne sail for the first half, then the westerly came in around the Islet and we had 40 knots over the boat, it was a bit lively coming home!”

The ACSBWPS series now re-focusses on Race 3 of the six-event competition, The 215-nautical-mile Newcastle Bass Island Race starting at 7:05pm Friday 12 October. With a strong fleet of 27 yachts already entered, including last year’s series champion Tony Kirby who’s on the hunt for the rare consecutive-series wins, the Race looks set to be a thriller.