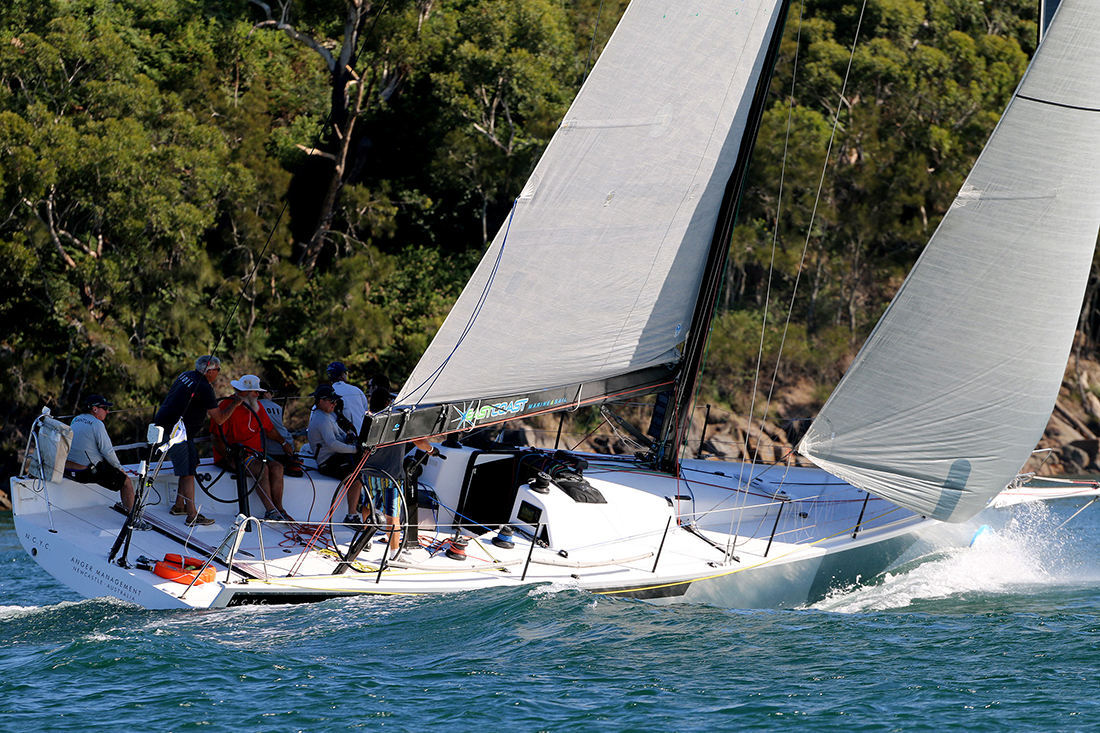 Within hours of online entries opening for the 2018 Pantaenius Newport Coffs Coast Yacht Race, the event had its first registration. And fittingly, it came from the first-placed IRC and ORCi yacht in 2017.

Anger Management, representing Newcastle Cruising Yacht Club, scooped the double last year in what was the crew’s 10th trek to Coffs Harbour, and owner Phil Arnall was even quicker with his entry buzzer this time around.

“Last year was the first time that we stuck with our original game plan from the start,” Arnall says. “In other words, stay close to the coast and not be tempted to chase the breeze out wide.

“That was a certainly novelty for us, and it resulted in our first podium finish. To be honest, I was pretty chuffed and proud of the crew.”

The Corby 43 had considerable experience aboard, most of whom had also raced on Arnall’s previous Farr 40 and Beneteau 40.7 of the same name. “Our average age was 57, and my contribution was to push that average up somewhat,” Arnall adds. “I’m really happy the race has been resurrected because, for us, it’s a good time to get away and a good distance.”

Son Richard Arnall, co-skipper on Anger Management, adds that Coffs Harbour is also a good destination for the finish.

“I’ve got four kids, so Christmas tends to get in the road of sailing,” he says. “With Coffs, you feel like you’ve had your fix of ocean racing but without committing too much time or resources.

“The family love coming up, though I must admit I like them to give me a night or two before they do so.  Also the delivery home is generally only 24 hours, and there’s no shortage of crew willing to do it.

“It’s the perfect thing to do in between Christmas and the New Year.”

Anger Management was purchased the day Richard’s youngest daughter was born. She’s now seven and the yacht has done every Coffs race since.

Recalling last year’s epic tussle with the Cookson 50 About Time and Rogers 46 Shakti, Richard says the race is often won or lost around Seal Rocks, the halfway point.

“The prevailing current dictates tactics, but there’s a notable change between Pittwater and Seal Rocks and then Seal Rocks to Coffs,” he adds. “Even though you think of it as an overnight race, we’ve been caught out before. So we’re pretty strict on getting our sleep and sticking with rosters, to remain fresh at the finish.”

Rob Brown OAM, the Race Director for the reborn Pantaenius Newport Coffs Coast Yacht Race, congratulated the Arnalls on being first to enter.

“We’re off to a flying start in our bid to double their fleet size this year,” Brown said. “Anger Management sailed a great race last year and were rapt with their results. I’d love to call on all club- and cruiser-racer sailors to consider joining them now.”

The race is run by Royal Motor Yacht Club Broken Bay in association with the Coffs Harbour Yacht Club. At 230 nautical miles, it’s conducted under Safety Category 3 Plus, which makes it affordable and accessible for a broader range of yachts.